eVol i is the art moniker for award winning Writer/Filmmaker J. Vinazza. Born in Lima, Peru 1978, eVol i was barely 4 when he was brought to Queens, New York City. He immersed himself in art and creativity. From comic books to graffiti, his art matured into a blend of Urban Surrealism and Pop Art. Illustrations and Paintings that peek interest, send a message, and/or pay homage to pop culture icons that shaped our collective social consciousness.

As a filmmaker, he often draws inspiration from characters of his favorite movies. His interests, which often are referenced in his pieces, vary from Love, Spirituality, Theology, Mythology, Sexuality, and Politics. He often experiments with different mediums but is most comfortable with watercolors, inks, pencils and acrylics. He graduated in 2004 with a degree in Media Arts and Animation from Art Institute of Fort Lauderdale. Combining his eye for aesthetic and performance, he has earned numerous awards for his short films. He has had many exhibitions and performed live paintings in many venues/events in South Florida.

Residing in Denver, Colorado eVol i continues to create short films with his crew Underlab Studios (underlabstudios.com) and working as a Multimedia Artist and Video Producer. Fine Art, however, remains his first love and passion. 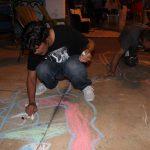 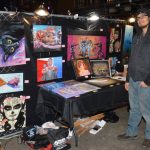 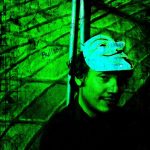 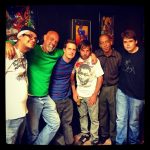